The Seminole Motel is located on N. Florida Avenue at the intersection of Cluster Avenue, 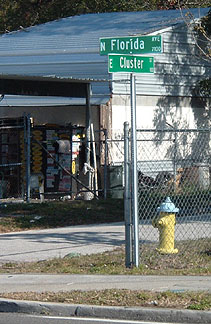 The motel was purchased in 1947 by Percy C. "Rex" Hobbs and his wife Mary E. Hobbs, who owned and operated it until 1958.  The current owner says she's owned it for 22 years, so current ownership has been since 1982. 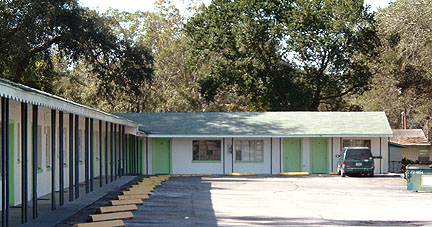 Mr. Hobbs added the "L" shape to the hotel by building the part you see in this photo. 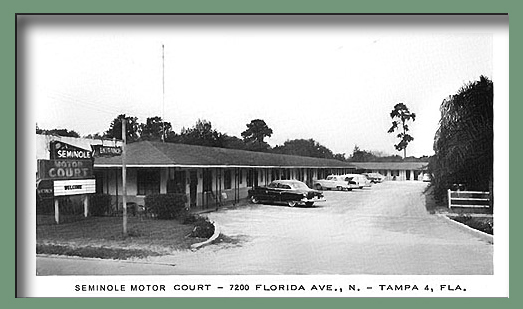 The Seminole Motor Court circa 1950's. 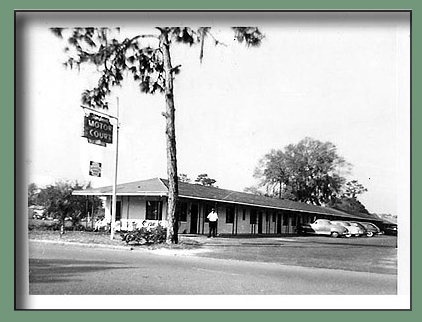 This photo of Mr. Hobbs and his motel was taken by Mrs. Hobbs, probably in the 1940's and likely some years before the postcard photo.  Note lack of curb, less shrubs, presence of pine tree and large tree behind motel.  Also tall sign post in better condition and lack of larger sign to the left of the pole.

This is the view from the motel entrance, looking north on Florida Avenue.

Just to the right of the motel sign you can see the Pioneer Cleaners sign, resembling a covered wagon.

That building to the left was formerly the Seminole Restaurant, which was built, owned and operated by the Hobbs family.
Note the Sulphur Springs water tower in the distance, just to the right of the sign.

The view from the motel entrance, looking north west.  The building on the right was the location of the Seminole Restaurant previously mentioned.  Rex and Mary Hobbs sold the motel in the mid 1950's, then later sold the restaurant and moved to Arizona in 1958.   In 1957 the restaurant building was purchased by the Fonte family and became the home of Fonte Pioneer Cleaners. 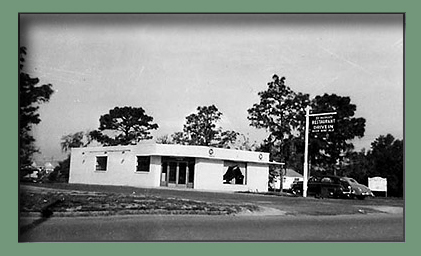 This is the restaurant as it looked in the late 1940's or early 50's.  It was called "Seminole Restaurant Drive In."

After Pioneer Cleaners moved in, Angelo Fonte added on to the building on the north and south sides to expand it, and relocated the entrance to the front of the building.

A special thanks to Mary Jane, daughter of Rex and Mary Hobbs, for providing these old photos and history of these Seminole Heights landmarks.

Back to home page