Their 1900 census, as seen below, shows Bastiano was in the grocery business.  The census enumerator made an error in listing their son, Mario, as a daughter "Mirabella Mirabella."  Josephine was 13, Mario was 9, Frank was 6 and Mary was 3.  Concietta was the mother of 6 children, but only 4 were living at the time of this census.  This record indicates they immigrated to the U.S. in 1888 and had been here 12 years.

Docks on the Hillsborough River by the Lafayette St. bridge, circa 1900 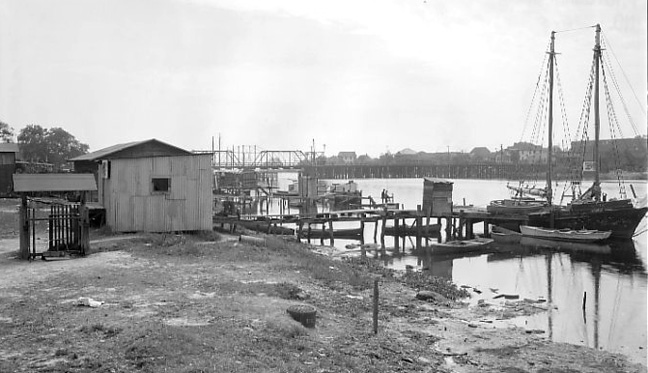 Mirabella's fish company at 1420 Lozano Avenue with the original Fortune Street bridge in the background, 1924. 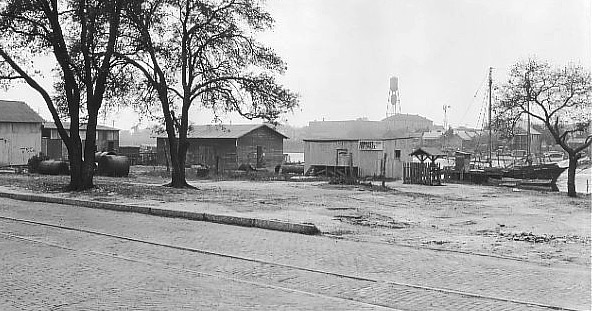 Mirabella's fish company at 1420 Lozano Avenue with Hillsborough River and Roberts City in the background, 1924.

Men stand around a fish hanging from the ceiling inside the wholesale and retail fish store owned by the Mirabellas.

Mike Mirabella, proprietor, is the man in the white trousers. This store receives fish from their own ships right at their back door.  May 12, 1939 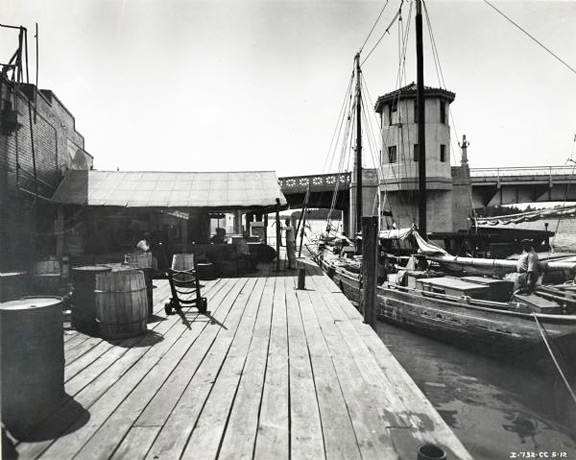 View of the dock area on the Hillsborough River  used by Mirabella Fish Company's wholesale and retail store on Water Street. Men stand and sit near the receiving area, and boats dock nearby.

In the background is the north side of the Platt Street bridge.

Click to enlarge marker
The Mirabella Fish Co. was not located here before the late 1920s.  See explanation below. 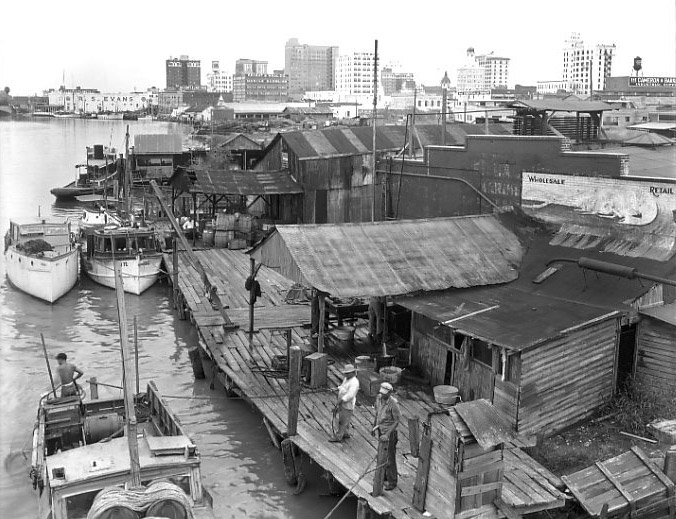 A view looking south along the Hillsborough River towards Seddon Island and the grassy islands, circa 1914
Mouse over the photo to see landmarks identified

The photo at right shows close up of above area where the historic marker claims Mirabella's was located since 1898.  This, and other photos showing Mirabella's Fish Co. further north at Lozano Ave. near Scott St. in the 1920s indicate that the company didn't operate near the Platt St. bridge until the 1930s.

The empty lot to the left of the closest sailboat appears to be where Mirabella's Fish Co. located in the 1930s.

The 1915 fire insurance map below shows the same area as seen above, but with north at the top.  Carew Ave. at lower right is where Platt St. would join in 1926 when the Platt St. bridge would be built.

The long building parallel to the water at upper left on the map is marked as vacant and is the same building seen in the photo above at lower left.

The larger building in the map at left is a Hendry & Knight Co. terminal.  The area along the river with the yellow stripes is marked as "Dilapidated Plank Wharf."

According to the Mirabella historic marker, the fish company would have been located along the waterfront where the Hendry & Knight terminal is located. 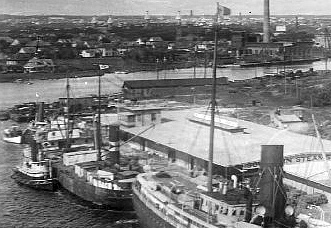 View of the site of the Mirabella Fish Co. at the foot of the Platt St. bridge, formerly 233 S. Water St.

It is now the site of USF Park along the Tampa Riverwalk.

State of the art automation at Mirabella's
April, 1971

Frank Mirabella and Rudy Romero behind the bar at Mirabella's, looking over a machine (the one with the tubes) they had just installed that would mix drinks automatically without the need for a bartender. According Mr. Romero's daughter, Sandra Romero Deck, they were very proud of this innovation.

Buster was born in Tampa in 1913 and spent most of his life running Mirabella's Seafood Co., which his parents Mario and Santa started when he was a teenager. He lived his whole life in Tampa and worked in his parents' seafood business from the time he was 14 until he was 75.  "It was all he ever knew, but I think he loved it," said his daughter, Santa Floyd. "I never once heard him say, 'Oh, darn. I have to go to work now.' Not once."

In 1938, Buster married Salvadora Teresa Messina.  Salvadora was born in 1918 and was a daughter of Antonio Messina and Rosalia Damico Messina.  Together, they turned the downtown market into such a Tampa institution that it seemed everyone in town knew Buster and Salvadora Mirabella. City leaders often tried to persuade Buster to run for the City Council. "He always thought his lack of education would keep him from being elected," his daughter said. Because he started working when he was 14, Buster Mirabella never finished high school.

Mirabella's Seafood Co. closed in 1988, with Buster as president, Frank as vice president, Sam as secretary and treasurer, and their sister Josephine Samuels as director.   Buster Mirabella was still enjoying the work, but the opening of the Tampa Convention Center changed traffic patterns and made it difficult for customers to reach Mirabella's. Chains like Red Lobster and Shells took customers and suppliers away from the mom-and-pop places. Besides, Mr. Mirabella was 75 and getting tired of unloading boats of seafood at midnight.

"I think he just thought it was time," his daughter said. He called it quits.

After retirement, Buster Mirabella remained active in the family's restaurant. But the market had been the main supplier of its seafood, so the restaurant lasted only another couple of years. He spent his later years relaxing with his wife, Teresa, who died in 2006, and indulging his longtime passion for the Tampa Bay Buccaneers. "He was one of the first season ticket holders," his son said. "He went to every game, rain or shine, even when they weren't winning any of them. He'd always say, 'They'll win the next one,' and he kept saying that until they did start winning."

Sebastian "Buster" Mirabella, co-owner of the now-closed Mirabella's Seafood Restaurant and fish market, died in March, 2008.  He was 94.   He died of heart failure March 15 after several years of declining health.

"He was just a hardworking man," said Norma Salter, Mirabella's fish market cashier of 31 years, until it closed.  She said Buster Mirabella "was the best boss you could have and a very nice man. He liked everybody." Though he never ran for office, Buster Mirabella thrived in the local political scene, helping his brother Sam run for and win a seat on the city council.  Buster was an avid supporter of the March of Dimes and participated in the Bayshore Boulevard walks every year.

He was one of the first season-ticket holders for the Buccaneers and attended all home games well into his 80s. "We kept praying he would see them win the Super Bowl one time, and they finally did," his daughter, Santa Floyd, 66, said.  After retirement, he started a discussion group that met at El Pilon restaurant on MacDill Avenue. Old friends would discuss politics and Tampa as it used to be.

"In all my life I never heard him say a bad word about anybody," Morris Mirabella said.  He was preceded in death by his loving wife of 67 years, Salvadora Teresa Mirabella.  Also preceding him in death were his parents, Mario "Mike" (d. July 24, 1970) & Santa Mirabella (d. July 1, 1979), sisters Connie Scionti, Annie Mirabella, and Josephine Samuels, and brothers Sam & Salvadore Mirabella.

Buster attended Christ Community Church and was a member of the Masons, Shriners, Elks, Civitans, Italian Club & Sons of Italy. He was a devoted husband, father & grandfather & was a good & decent kind gentle man.

Buster and Sam Mirabella, working the restaurant in April, 1985.

Upon Sam Mirabella's death in 2006,  Hon. Jim Davis of the Florida House of Representatives, stated on April 27, 2006,  "Mr. Speaker, I rise in honor of Sam Mirabella, who embodied the boundless spirit of his native Tampa, Florida and was devoted to serving his community. During his 12 years as a Tampa City Councilman, Sam played an important role in improving our city and helped usher Tampa’s government operations into modem times. And as a charter member of The Tampa Sports Authority, Sam was instrumental in bringing Tampa’s first stadium to life and putting Tampa on the map for America’s sports fans and teams. However, the people Sam served didn’t have to go to City Council meetings to bend Sam’s ear. Sam, with his trademark cigar and colorful sense of humor, was always available at Mirabella’s Seafood Co., which he co-owned. Even in his retirement, Sam was a fixture in South Tampa, riding his bike through the neighborhoods on a daily basis and stopping to talk to just about anyone who crossed his path. Sam served his country in World War II and was always giving back to his hometown through a host of community and charitable organizations. A die-hard Gator fan, Sam was also eager to support his alma maters, the University of Florida and H.B. Plant High School. Sam’s passing is a tremendous loss for the Tampa community. I would like to extend my deepest sympathies to his family and many friends."

Sam was survived by his wife, Marie Dean Mirabella (who passed away in Aug. 2010) and children, Sam Mirabella Jr., Charles M. Mirabella, and Shelly M. Lightsey; and his grandchildren, Lauren, Michael, Jack, Matthew and Simi; as well as many nieces and nephews.

"The Italian Heritage in Tampa" by Tony Pizzo, 1977